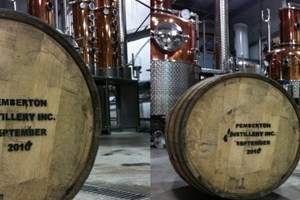 Schramm Vodka and the Pemberton Distillery is located in the beautiful Pemberton Valley.  The Pemberton Distillery began as an idea in the summer of 2003.  Tyler Schramm and his brother, Jonathan, were discussing Jonathan's small potato farm in the Pemberton Valley.  Pemberton (aka "Spud Valley") is one of BC's prime agricultural areas and is an international supplier of seed and table potatoes. The brothers realized that Pemberton potatoes and pristine glacial waters from the Valley's creeks would provide the perfect ingredients for high quality vodka.

The three Schramm brothers, Tyler, Jonathan and Jake, built the distillery during the winter of 2008.  In the spring of 2009 Tyler carefully distilled the first batch of locally grown organic potatoes. That August, the first cases of Schramm Vodka were shipped out to British Columbia. Less than a year later Schramm Vodka was awarded 'Double Gold' and 'Spirit of the Year' at the 2010 World Spirits Awards held in Austria.  This is regarded by industry experts as one of the toughest spirits competitions in the world.

Schramm Vodka begins in the fields at Across the Creek Organics, a fourth generation family farm located just 15 km from the distillery.  The vodka is handcrafted from whole organic potatoes.  Following the tradition of fine single malt scotch distilleries, the potatoes our fermented without synthetic additives and double distilled in small batches using a copper pot still. Master Distiller, Tyler Schramm, performs the entire distillation to ensure that only the very best - 'the hearts' - of the collected spirit is used. Unlike industrial distilleries which produce spirit continuously in large volumes, the final spirit distillation of one batch of Schramm Vodka takes 17 hours.

Schramm Vodka is carefully blended with pure water from glacial streams in the Coast Mountains. Small batch distillation means that every batch of Schramm Vodka is tested by the Master Distiller for aroma and taste before hand bottling.

In September 2010 the Pemberton Distillery produced the first small run of organic single malt whisky using organic malted barley from British Columbia and pristine mountain water. Master Distiller, Tyler Schramm, prepares the entire mash and carries out the fermentation on site. The whisky will age in American Oak ex-Bourbon casks for a minimum of three years.

Schramm Vodka is currently available in liquor stores, bars and restaurants in BC and Alberta.

If you are visiting Pemberton, drop by the Pemberton Distillery for a highly informative guided tour that takes you behind the scenes at the distillery and offer fascinating insight into the handcrafted production of artisan spirits.  You can also sample the award-winning Schramm Vodka and the new limited batch organic Gin in the tasting room!  Make sure you also visit the gift shop for limited release spirits and specialty products.

View our  Pemberton Hotel Suites. Please contact our friendly staff if you have any questions about the Pemberton Distillery  or would like to make a reservation.