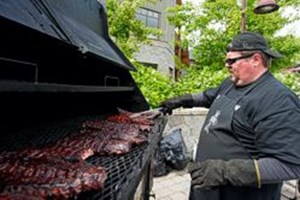 The 2012 Canadian National BBQ Championships is a three day event held at Dusty's Bar & Grill in Whistler, B.C. This marks the 11th year in a row the championships have been held in Whistler adding a little extra flavour to the August long weekend.

The top BBQ chefs from all over Canada and the United States will gather in Whistler this weekend for the right to be called Canada's best grill master. Also up for grabs for is an invite to the World Championship Invitational Barbecue in Tennessee and World Barbecue Championships in Las Vegas, Nevada.

If you're in town this weekend and love you some BBQ then don't miss these three days of BBQ nirvana. Listed below is the day's events and activities.

4PM - The Pacific Northwest BBQ Association official judging regulator of the event is offering an introduction to competitive judging. The quick course tells you what the official judges of the championships will be looking and tasting for all weekend.

9PM - Led Zeppelin cover band Whole Lotta Led will perform. Tickets are $10 and can be purchased at Dusty's.

Join us Saturday as amateur BBQer's take centre stage in a series of competition based grilling. Competition was open to the public anyone who registered before the event was allowed to take part. The day will feature three different competitively judged events and over $2000 in cash prizes to the winners.

7PM - The night features a whole hog BBQ dinner with all the fixings. You can grab a plate for $20 and chill out on Dusty's beautiful outdoor patio.

9PM - Canadian music group the Matinee will perform. Tickets are $10 and can be purchased at Dusty's.

The pros arrive Sunday to compete in 5 different BBQ categories. Come watch as they battle it out for $5000 in cash prizes and for the invitations to the World Championship Invitational Barbecue in Tennessee and World Barbecue Championships in Las Vegas, Nevada.

9PM - Darren Lee & the Memphis Flash an Elvis tribute band will rock out Dusty's. Tickets are $10 at the door.

Check out a quick video on last year's event

looking for a hotel the Canadian National BBQ Championships?

The Pemberton Valley Lodge is located just 30 minutes away from Dusty's Bar & Grill.

We offer beautifully appointed guest suites and great amenities. Please contact our friendly staff for more information or to make a reservation.