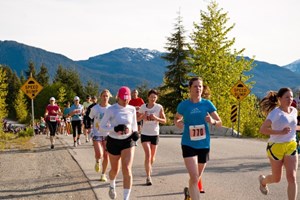 The Terry Fox Run is an annual fundraising run that takes place throughout Canada and participating countries around the world. The run continues the legacy of Terry Fox a young boy who lost his life to cancer at the age of 22. Terry became a national hero when he decided to run across the country to raise money and awareness for cancer research. However Terry had only begun his trip the cancer he had just overcome reappeared and took his life shortly after.

On Sunday, September 16 we run to continue the one race Terry could never finish. Canadians all across the country will gather in their local communities to take part in their local Terry Fox Run.

Please Join us this Sunday at the Pemberton Airport for the Pemberton Terry Fox Run. Registration begins at 9:30AM with race to take place at 10AM. You can choose to either participate in the 5KM or 10KM distance which can be run, walked or biked.

Entrance to the event is free however we ask that you make a donation to the Canadian Cancer Society who will have representatives on hand.

Watch the 2012 Terry Fox PSA below

looking for a pemberton hotel for the summer?

We offer beautifully appointed guest suites and great amenities. Please contact our friendly staff for more information or to make a reservation.