When Canada Wins, You Win Too! 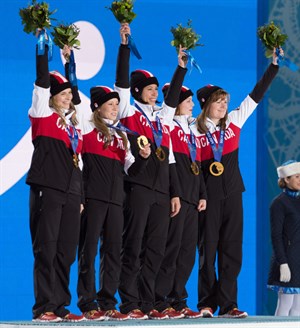 We were so excited when the olympics began this year in Sochi. Memories of the last olympics being held so close to home flooded our thoughts. We made a special olympic display in our lobby and hosted many of the games there, too. Memorably, the last hockey game of the olympics, Canada versus Sweden, was at 4:00 am. And yes, Canada won, for yet another gold medal!

In the end, Canada came home with 25 medals, an "A" for effort, and 10 golds. Perhaps it was all that cheering going on in our lobby that helped bring home so many medals? Whatever the reason, we were glad to have been able to cheer on our favourite teams with you and share some of the memories, too.

And, of course, to make things a little more interesting, we offered a free night's stay to one person for every gold medal Canada won.

The Names Have Been Drawn!

Winner's names were drawn from a sealed box which contained names of any local Pembertonians who had entered, and the names of guests who were staying with us the night Canada won the gold.

We have contacted all the winners, and they are getting excited about their free night's stay at the lodge.

We came home with 10 gold medals, including:

And, last but not least, 5 bronze medals:

And, as we mentioned, an "A" for effort. The stories this year around amazing things Canadian Olympians did and had done were perhaps better than the medals they won. What stellar people represented our country. Go Canada Go!

And, as all Canadians are aware, the important game was won, twice over. Both Canadian men and women won gold for hockey in 2014! We couldn't be more proud.