"You Gotta Eat Here" at Mile One Eating House 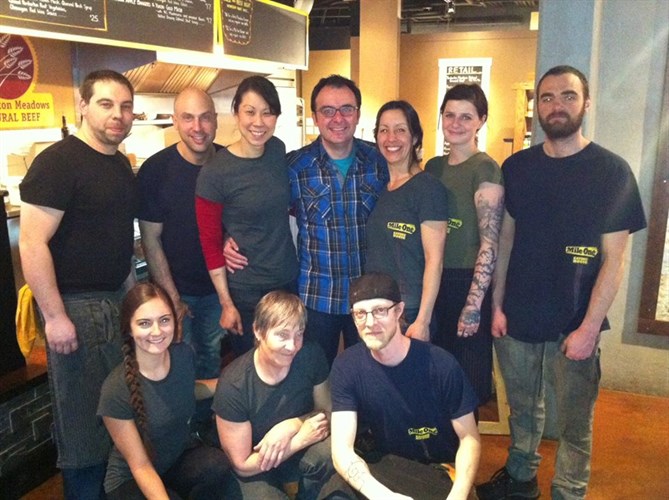 Mile One Eating House was filmed by You Gotta Eat Here! A Food Network Canada television show. Pemberton farm-to-table food just got noticed in a major way. Randy Jones spoke with us about the event, which took his restaurant to the next level and made all of Pemberton a little more proud of our farm-to-table food for that day.

As Randy says, "The totally professional film crew made everything feel right" that day. They were on stage, and everyone had pulled together for the event, but the crew at You Gotta Eat Here made it seem "right". So much preparation went into that day, Randy for sure wants huge thanks "to go to the You Gotta Eat Here Crew, they were all very skilled and professional in their craft." But also, "to our team for rolling with the workload, hype, and general intensity of the time leading up to the event and during the event."

It's an incredible story for Pemberton. We are already fairly well-known as a gateway to the backcountry, as a place to go for sports like snowmobiling, mountain biking, backcountry skiing, etc. But we know that our food is pretty special, too. More and more people know about our farms. Slow Food Cycle Sunday, for example, attracts thousands of people each year to the event. But linking everything together, realizing that we have incredible athletic opportunities, we grow incredible food and then we create epic food adventures in our local restaurants...it's something residents know well. But have visitors figured it out yet? They will soon.

As Randy says, "I think it's great for Pemberton, to have a Food Network Canada TV show visit Pemberton can't be a bad thing!  I hope it helps to continue to put Pemberton on the Foodie map!" We agree.

The support for the event was huge. Randy says that "It was fun for sure," but more than that,  "we had many people involved in the shoot," and just the sheer numbers of people involved "and overall the social media and personal well-wishes and support were huge."

When asked if he had anything to say to Pemberton about this event, Randy just said this: "Thanks for continuing to support Mile One, and thank you to those who wrote into the show; about what we do here in Pemberton."

We're happy with what you bring to the table in Pemberton, Randy (and crew). Thanks for taking Pemberton up a notch. And we'll keep you informed about when the show will air. As soon as we know, we'll be shouting it out.

Did you attend the event? What do you think of showcasing Pemberton restaurants on national television? Should it happen more often?