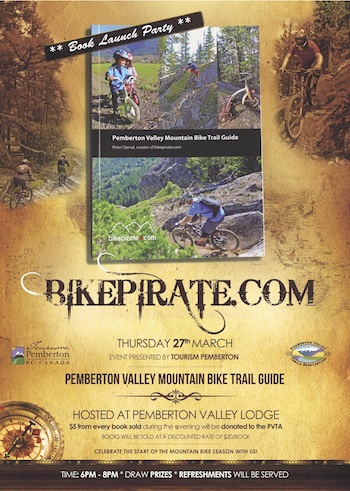 The very first Sea-to-Sky Mountain Bike Trail Guide is out and we're hosting the launch party on March 27th at 6:00pm.

This is his third such guide book, and the first for the Sea-to-Sky corridor. Peter seems to live and breathe the essence of mountain biking, spending much of his time either on the trails or writing about them.

As Peter says, "I love riding and more importantly I love sharing this wonderful sport with others. It's really important to me that proper trail information and descriptions are provided so that newbies can plan to ride trails according to their ability."

Definitely true, and certainly a needed book for this area, which has seen an increase in mountain biking in recent years. The secret is getting out about Pemberton as an epic spot for all kinds of cycling, including mountain biking.

The recent $120,000 investment ($60,000 by the Village which was matched by the federal government) in the surrounding trails and just the recent excitement about cycling tourism in the area in general brought this from Peter, "As far as the 120,000 investment in mountain biking from Pemberton, It's amazing! Communities such as Pemberton are realizing the economic, not to mention health benefits, the sport brings to the area and it's awesome to see."

Launch Happens at the Beginning of Biking Season

The March 27th launch is just at the beginning of mountain biking season in Pemberton, which can, some years, be a nearly year-round sport. This year, we were mountain biking well into January and early February, to the point where some people felt that this year we might indeed ride year round.

Well, we've had a bit of a break in recent weeks, as the powder hounds have descended and skiing, sledding and snowshoeing has taken over the Valley.

But from March 27th on, we'll be turning our attention toward mountain biking, including the upcoming Nimby Fifty event, which locals have noted is only 37 kilometres long, "but feels like 50". There are many things about the Pemberton Valley that point toward a laid back, casual lifestyle, but the way we mountain bike is not an example of this.

A large part of that culture is nurtured by the guys at The Bike Co. who Peter gives a shout-out to, telling me when I asked about them, "Yup, the Bike Co is a regular stop for me. The guys there are great and supportive. I spent lots of time picking their brains on trails, not to mention having my bikes taken care of." Having the Bike Co. in the Village is a resource for many enthusiasts, as well as being a bit like the cultural centre of mountain biking in the area.

Peter is an amazing person to chat with, and brings with him a great energy and enthusiasm for the sport he loves. He makes sure to say "a big thank you the Pemberton community for being so supportive of this initiative, including the PVTA (Pemberton Valley Trail Association) and David (MacKenzie) at the Pemberton Valley Lodge. It's so nice to have so much support from the locals when working on a book for their area."

David MacKenzie agrees that the Pemberton community is a supportive one for cycling in general, and certainly of mountain biking. "We have an outdoor playground in our background," he said, also noting that he hopes to get lots of the community out for the launch to hear Peter speak, buy the book at the discounted price, and also invest back into the trails, as $5 from the sale of each book will go the to PVTA (Pemberton Valley Trail Association).

The app is done with Peter's partner Ryan Robertson from TrailMapps. They have a few apps they've done and are working on many more projects together.

The book will be available for sale at the launch at the reduced price of $20. And out of that $20 price tag, $5 will go toward the Pemberton Valley Trail Association. So make sure to come, listen to Peter's stories, and buy the book that evening.