It’s been raining on and off for a week and there’s more to come in the forecast. When we have this kind of weather it’s common to see people checking out the banks of the Lillooet River, commenting on the height of the water and remarking to each other “You think we are in for a flood?”. The answer to that question is a lot more likely to be “No” these days due to all the work that has gone into the management of the Lillooet River which runs through Pemberton.

As rivers flow across gently sloping landscapes, such as the valley bottom in Pemberton, they begin to curve back and forth as a result of the uneven ground. These curves are called meanders and they are ever changing. Faster flowing water on the outside curves erodes the banks and picks up sediment creating deeper water, while slower moving water on the inside of the bends, unable to carry as much sediment, creates shallower water.

The low lying areas surrounding a river are referred to as a floodplain. This name aptly comes from the fact that these areas are covered with water when the river overflows its banks. Sediment is deposited in these areas during each flood which makes really great soil for agriculture. Much of the area in the Pemberton Valley is located on the floodplain of the Lillooet River.

How does this affect us in Pemberton Valley?

In addition to providing us some great opportunities for recreation, the Lillooet River is one of the biggest contributing factors to the fertile soil that allows for such abundant agricultural activity in our valley, but the original winding meanders and low-lying floodplains weren’t ideal for human settlement. That is until some changes were made.

In the 1850’s, a trail linking Pemberton and Squamish allowed for easier access for fur traders and gold seekers. In the early 1900’s settlers began to develop an interest in agricultural potential in the Pemberton Valley. Early inhabitants began rudimentary flood protection efforts such as digging ditches and constructing berms to keep the water at bay while building their homes on higher ground where possible. These efforts were a good start but the wide and winding river was prohibitive to large agricultural operations.

In 1940, the first large flood was recorded by the community. This event resulted in the creation of the Pemberton Valley Drainage Committee and subsequently garnered attention from the Government of Canada in regards to the benefits that could be resultant of flood protection in the valley. With a focus on agricultural land work began. 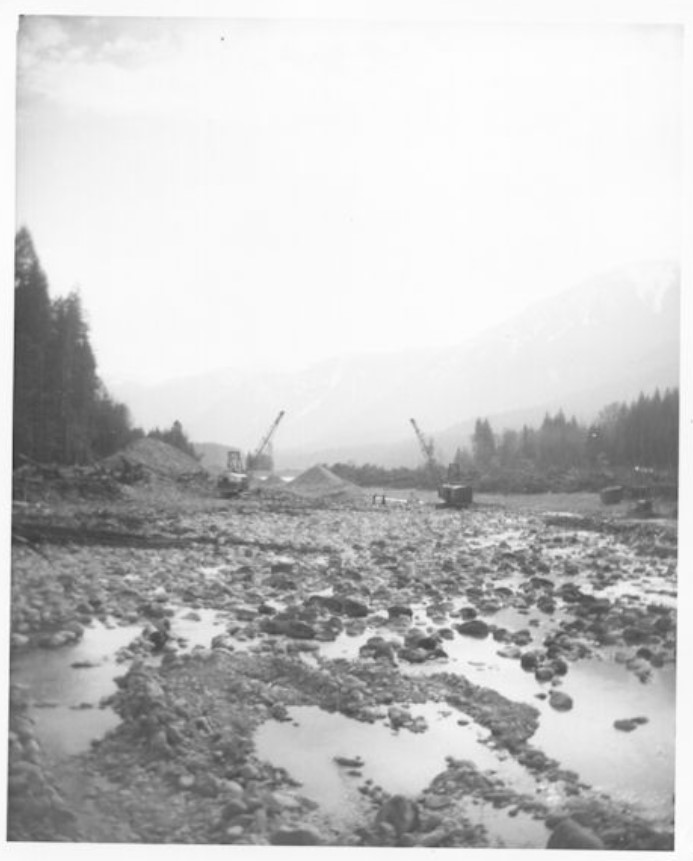 Lillooet and Tenas lakes were dredged of approximately 473,000 cubic metres of sediment to lower the water levels and relieve pressure on the dyke system which was being built, along with the installation of drainage ditches within the dyked areas. Increased capacity of these lakes improved the drainage in the lower parts of the Pemberton valley.

Additional work was undertaken to straighten the river. This would increase the flow of the river and provide abundant area for agriculture. In total there were seven “cuts” made to the Lillooet River in the upper area of the Pemberton valley. The largest, the Mackenzie Cut, was 4.3 kms long and significantly straightened a meander that had historically crossed the entire valley, in the area now known as Riverlands. These large changes to the river’s structure drastically changed the geography of the valley, opening up greater settlement areas and agricultural opportunities. Without this work the current location of the town center would be in the river!

For detailed information on the initial flood protection efforts check out The McGugan Report courtesy of the Pemberton Valley Dyking District.

Significant flood events in 1984, 2003 and 2016 resulted in large investments in flood repair and protection improvements in Pemberton Valley and the surrounding areas. While the 2010 Mount Meager landslide in the upper Pemberton valley did not cause major flooding the event deposited millions of cubic metres of sediment into the river system affecting the timeline for the next possible flood.

Today, the management of the Lillooet River and the entire valley drainage system is an ongoing project. As sediment is constantly being deposited the river requires dredging downstream. As the flow erodes the banks the dykes must constantly be monitored and maintained.

So next time you find yourself near a river in Pemberton be sure to think about all the work that has been done and continues to be undertaken to make the Pemberton Valley what it is. Oh, and if you are going out this week, bring an umbrella!

For more visuals in regards to the historical work on the Lillooet River you can view an information board along the Valley Loop Trail accessed from behind the Lodge.