What Is So Special About Potatoes in Pemberton?

Pemberton is Home to Spud Valley 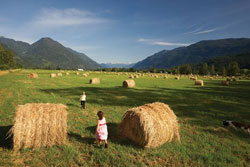 Potatoes Put Pemberton on the Map

Glad you asked. Pemberton was originally settled by the Lil'wat Nation, which is still a thriving community in the area. From 1858 to 1865, gold rush settlers came. Soon after, farmers discovered that the soil was arguably more valuable than the gold, and so began Pemberton's history as an agricultural mecca of sorts. Farmers soon settled on the humble potato as the crop of choice, and from there, Pemberton has become the "Seed Potato Capital of North America". More potato facts to wow your friends and help you win Pemberton potato related trivia contests:

1. Pemberton Valley was first designated as a seed potato control area in 1945, 6 years before electricity came to the valley.

2. Pemberton became the first commercial virus free seed potato control area in 1965. Since then, the valley has become renowned for growing some of the best seed potatoes in the world.

4. All in all, however, Pemberton's contribution to national potato production is small. British Columbia produces less than 3% of all potatoes grown in Canada, and Pemberton, with 17 growers, produces only a small slice of that 3%.

5. Over 27 varieties of potato are grown here. The Pemberton Farmer's Institute lists 27 varieties as "some of the potato varieties grown in the area". Varieties include Sieglinde, Eramosa, and Russian Blue.

6. Potatoes contain all the vitamins and minerals necessary to sustain life, except for vitamin D (which you can get from the sun.) You can live off of potatoes.

7. Even in your home garden, you are only allowed to plant certified Elite 4 or earlier seed potato. You can get these through the Women's Institute or at Home Hardware.

8. As a rough guide, each potato plant should produce between 5 - 7 pounds of potatoes.

10. The Pemberton Distillery is the only certified organic potato distillery in the world.

Did you learn a thing or two? Potatoes are a Pemberton staple, and now you know why. Next time you're in the valley, make sure that you stop by a farmer's market in season, or check out all the local produce at the Pemberton Valley Supermarket. Find out where you food comes from and eat local. Oh, and add Pemberton potatoes to your diet. They're good for you & taste great!